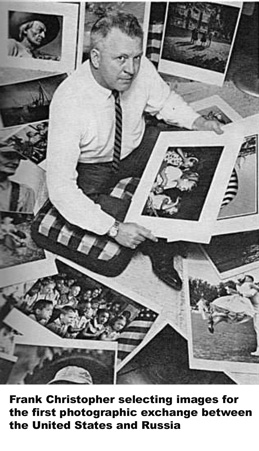 In 1958 as a private citizen, my father, Frank Christopher (1920-2005) approached the United States State Department with an idea: initiate photographic art exchanges between America and Russia as part of the People-to-People program for cultural exchanges. In June 1961 this idea became a reality; a historic moment when Frank Christopher cut the blue ribbon opening the American exhibition held at The Friendship House in Moscow, Russia. His efforts are considered to be the beginning of the cultural thaw between these two nations that have endured a long sense of conflict. “The artistic photograph sent from one country, to be put on exhibition in another country, offers a medium of communication free of language barriers. Photography is capable of carrying a message and also of contributing to mutual understanding. Real and lasting progress doesn’t begin with grand extraordinary moments; it begins with an idea, and many small steps towards making that idea a reality (Frank Christopher).” My father’s idea to bridge artistic, intellectual, spiritual, and cultural divides between nations has produced historic results on many levels involving artists and nations. CFFTA has continued that reality of moving ideas forward, continuously nurturing the opportunity for lasting progress, knowing that we are making difference in improving the creative process worldwide.